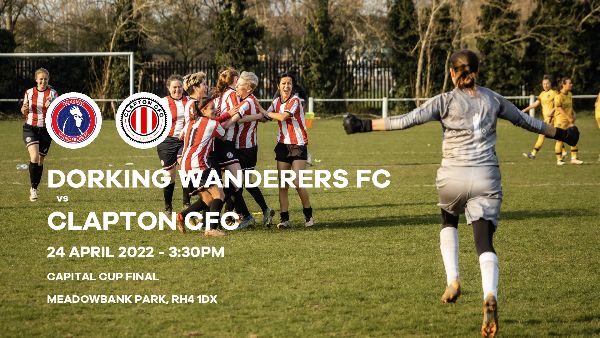 In a season of amazing cup upsets, the Clapton CFC women’s first team are looking to add one more name to the list in the Capital Women’s Cup final.

It’s going to be a tough task. Dorking Wanderers have home advantage and they are a division higher. They also have George Best’s son in charge and even a BBC3 film crew following them…

But this team never gives up, and they’ll be doing everything they can to add some more silverware to the cabinet. Come along and cheer them on!

The Capital Women’s Cup is a prestigious competition for teams at our level and one higher across the counties in and around Greater London.

In their first season they achieved promotion from the South East Counties Women’s League (Tier 7) and were finalists in the Capital Women’s Cup, losing on penalties.

Admission costs £5 for adults and £3 for concessions and you can book in advance or pay on the day.

You can still book NOW from this Eventbrite link. If you have booked tickets but can no longer make it, please email Sam Brown for a refund.

Dorking has three train stations – Dorking Main, Dorking Deepdene and Dorking West – all within 10 minutes walk of the ground.

Parking is not available directly at the ground, however there are several public car parks within walking distance: