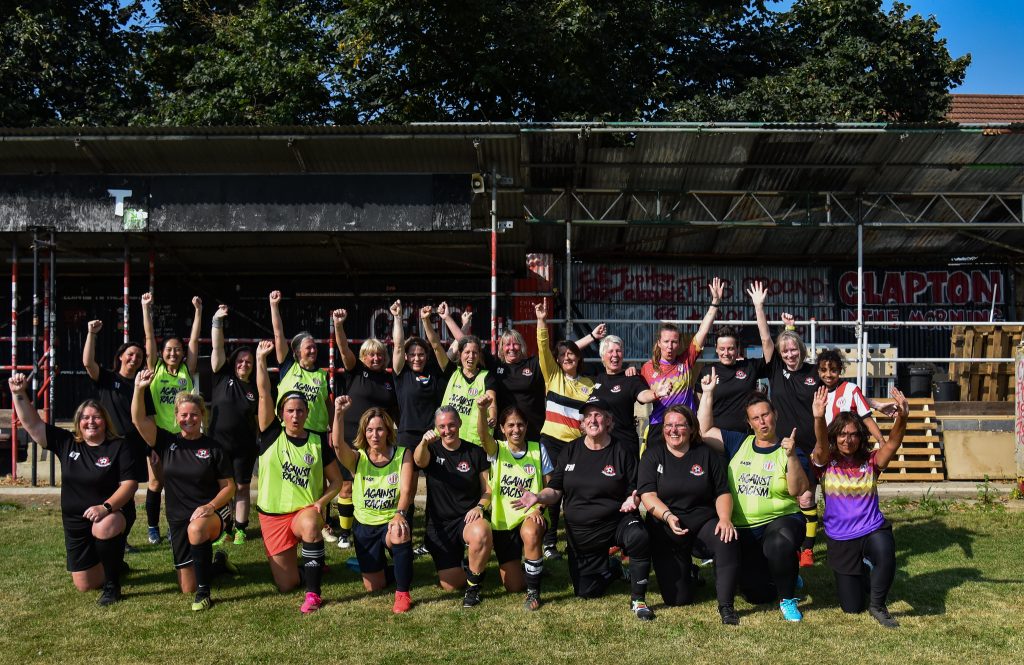 The Lost Generation – women born under the ban on football and the subsequent wilderness years – were denied the opportunity to play the beautiful game.

Outright banned from football pitches, or hounded off them, or even worse never knew what they were missing as it was presented as not a game for them.

So it was only right the first adult games at the Old Spotted Dog Ground went to lost generation players and that the Crawley Old Girls were there. They are an amazing group of outstanding women.

COGS, N16 and Clapton women’s open access players came together for some five-a-side in the sun. Ages ranged from 40 years to 67years. Some great football was played and good times were had.

Everyone played 3 x five-a-side games. We had no final we just had a mass 12v s 12 game at the end so we were all winners and all got medals to remember the day.

For me Annu’s goal or maybe one of Lisa’s two goals were probably goals of the tournament. Proud to say my first goal at the Dog came from a header from a corner.

The beautiful game belongs to no one and everyone and that is finally starting to really mean everyone – or it is in our little corner of a football field in East London.

Also big thank to the OSD grounds crew who cut the grass and to our Simon and to Yusef from Renaissance FC for giving us their time and being our refs as well as Kevin and Eva who have supported us throughout and so defo need a mention.

Huge thanks to all the COGS. They inspired me and Julie back into football and into coaching and reclaiming a place in football. Carol Bates specifically.

Me and Julie entered our first tournament as N16 after decades away from competitive football. It was the 2016 People’s FA Cup five-a-side vets division and was a bit scary. The finals were in Sheffield and that is where we met the COGS.

Carol had established the COGS and after Sheffield we watched her journey online developing them and becoming a coach but focusing on lost generation returners as well as beginners ie women who never got to learn to play because of the ban and the patriarchy.

We grew N16 initially joining a league me as a striker with Julie’s outrageously safe hands between the sticks. But then we met Clapton.

Me and Julie set up the CCFC open-access training. We have 70 women in the group around 20/30 attending each week. Since then we’ve formed 2 x five-a-side teams in the Super5 League and a Beginners 11-a-side team.

Come along and have a go.