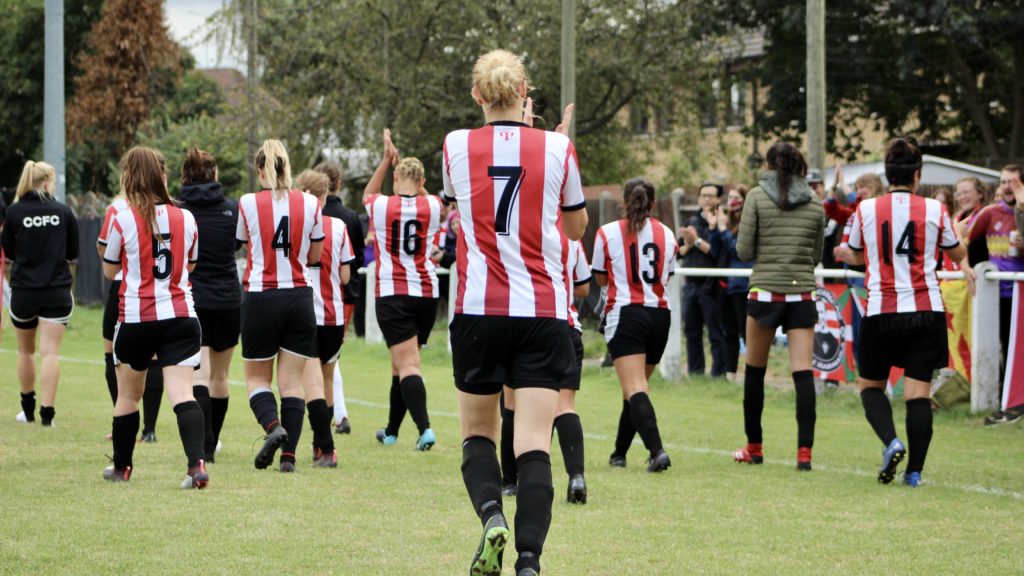 After many months without any football, and a few weeks behind closed doors, Clapton fans finally got to see their team in action in the flesh and were treated to an entertaining match to boot.

As part of a trial event, 100 spectators were allowed in to the Stray Dog, with appropriate temperature checks, social distancing, and vast quantities of hand sanitizer on hand. A true volunteer effort that accurately showed what our club is about.

The Ton’s opponents on the day, Hackney Women’s FC, play one level higher up the pyramid, although you wouldn’t have known it with Clapton’s bright start. The team, under new management this season, started brightly, with lots of nice pass- and-move play causing problems for the visitors.

A number of trialists caught the eye, in particular on the left-wing, and the return of Emily Link will strike fear into the heart of many goalkeepers this season. And rightly so.

However, as the half wore on Hackney got more in to the game, and whilst the best chances fell to Clapton, Polly Adams in the Ton’s goal had to be at her Schmeichel- esque best to ensure the first half ended goalless.

The second half went along in much the same fashion. Clapton had swapped goalies at half time, with Sophia Axelsson called into action early on to make a superb save, tipping the ball round the post from after a dangerous Hackney attack.

At the other end Clapton were still causing problems but couldn’t find the
breakthrough. That was until Emily Link collected the ball, fully 35 yards out, looked up, and planted one in the top corner. Keeper no chance, utterly outrageous.

This looked like it could be the winning goal. That was until Hackney scored an outrageous goal of their own, a volley from the edge of the box leaving Axelsson no chance this time.

In the end the Tons had to settle for a draw, more than holding their own, and for large parts of the game outplaying their higher-level opponents. With the formation of a new development team also confirmed and a number of exciting new faces, Ton’s fans can look forward with excitement to the forthcoming season.