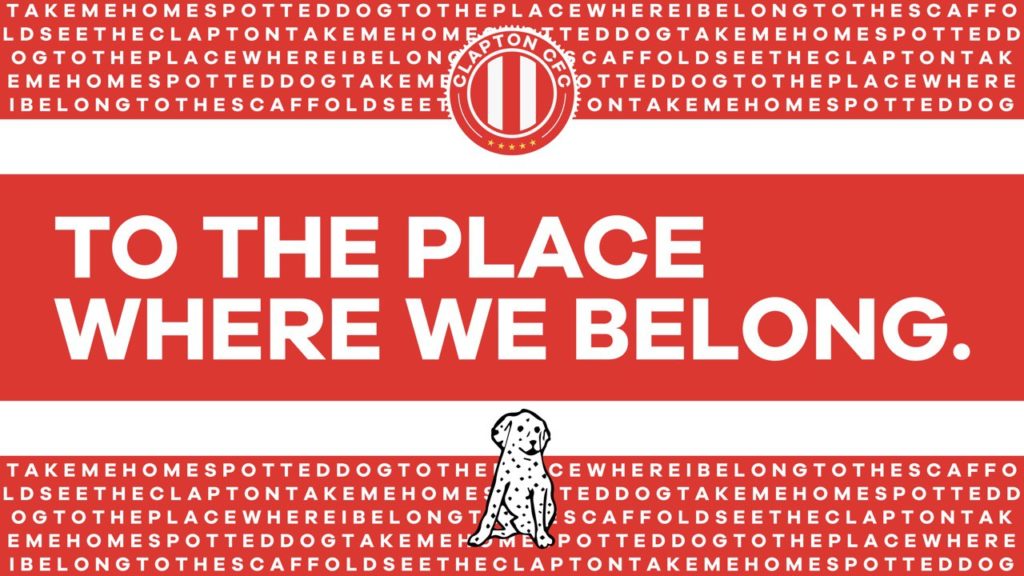 The oldest senior football ground in London has been the spiritual home of Clapton supporters for over 130 years… but for the first time ever we now own it.

The Old Spotted Dog ground, on Upton Lane in Forest Gate, is next to the boarded-up grade II-listed pub of the same name that is now being turned into a hotel.

It has hosted games against many of the top clubs in its history, including nearby Premier League giants Arsenal, Tottenham Hotspur and West Ham United, Dutch giants Ajax and a host of 1966 World Cup winners.

The previous owners, Star Pubs & Bars, had been looking for new tenants since last summer, when it terminated the lease held by Newham Community Leisure Ltd due to non-payment of rent.

Supporters-owned Clapton CFC, off the back of selling a phenomenal 15,000 replica shirts, were originally offered the lease in September 2019.

A few months later, the plans changed and the club were given the chance to purchase the freehold outright instead.

In a vote by the membership at the club’s General Meeting, it was unanimously agreed to make an offer, which was accepted, and the process of changing the ownership has now finally been completed

The ground does however need a significant amount of work to bring it back up to the required standard after a sustained period of neglect by the previous leaseholder.

It means both the men’s and women’s first teams will still need to play at their temporary home of Wadham Lodge Sports Ground in Walthamstow for the upcoming 2020/21 season.

However, the new Old Spotted Dog Ground board of directors, made up of Clapton CFC supporters and residents from the local area, are optimistic of raising the funds needed to restore the ground, and can bank on a sizeable number of the Tons many fans and 1,350 members to volunteer.

A proposal has gone to Clapton CFC members to release funding to go towards the necessary improvements to bring the Old Spotted Dog back up to standard to host competitive football again.

For the first time ever, the oldest senior football ground in London is owned by a football club, and a member-run, non-profit, community-focused football club at that.

” Bringing Clapton’s spiritual home back into community use, after a season of boycotts of Clapton FC home games when it was placed into liquidation by the previous tenant, was absolutely central to the motivation for setting up Clapton CFC back in the summer of 2018.

“Finally having a ground of our own, owned by members, will offer long term stability for the club and also the chance to build lasting links with the local community.

Whilst the Old Spotted Dog ground is now owned by Clapton CFC, day-to-day running of the ground will be transferred to the recently formed Old Spotted Ground Trust.

The long fight to make the Old Spotted Dog a community asset once more has been backed by West Ham MP, Lyn Brown, Newham mayor Roksana Fiaz and many local councillors.We are very grateful for their help in helping us achieve our dream.

At a time when so many community clubs are under threat, it is wonderful to know that Clapton CFC are instead taking huge steps forward to secure their future locally. Clapton have a special history at the Old Spotted Dog ground, and a powerful connection to our communities in East London through their support of charities and causes.

I‘m thrilled that finally Clapton CFC are back home in Forest Gate where they rightly belong. I’m looking forward to working with the Club and its dedicated members in bringing the beautiful game to new and diverse audiences in Newham. Reflecting Clapton CFC’s continued commitment to solidarity, cooperation and equality through football, I am so thankful and proud of the Tons.

We at Clapton CFC would desperately like to see the Old Spotted Dog benefit the whole local community, and so are keen to hear from community organisations who would like to use the facility when it is back up to an acceptable standard  – email: osd@claptoncfc.co.uk

More information can be found on the new website for the Old Spotted Dog, which has been launched today: https://oldspotted.dog