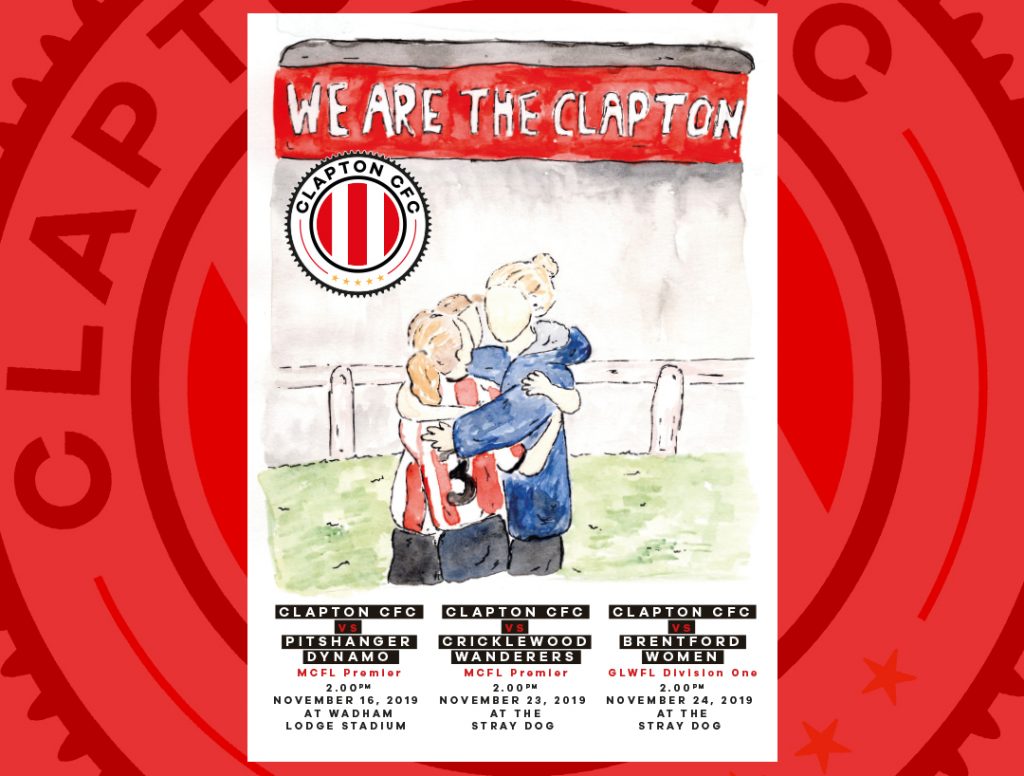 The cover for our next programme was drawn by Clapton CFC member, Bessy Davidson.

Bessy is 16 and has been following CCFC since the very first home game at The Stray Dog.

She is the creator of the “We Are The Clapton – Always Antifascist” banner that you see hanging at home games, which she made as part of her supporting portfolio for her GCSE art exam last summer.

She comes to football with her dad, initially because she enjoys long car journeys and the opportunity to play her own music on the stereo!

However, she enjoys the atmosphere at Clapton games and the inclusivity of the support.

Although she’s not yet made it down for a women’s game this season, she liked the image of the players hugging at the end of the game – “I left faces blank so that they could represent anyone in the team or even the supporters.”

“I like the fact that the covers are drawn or designed by fans, it was also inspiring to read about Alice May Williams not only playing for Clapton but being an artist, especially that her work is linked to the issues of anxiety and mental health.”

Bess has been going to football for many years, she’s seen St. Pauli play home and away (at her last St. Pauli game, by pure chance, she ended up standing with the United Glasgow Women’s team, something she only realised when one of them started up a chant in a broad Glaswegian accent!)

During the 2012 Olympics, she saw the British Women’s team play at Coventry City but, sadly, her lasting memory of the occasion was men in the crowd shouting out sexist and racist comments.

So, for her, Clapton is a welcome change.

On the subject of engaging with younger fans, “I’m not really sure how best to encourage more teenagers to start supporting Clapton, although the Insta stories could be a good way in. I think they just need to come down to the ground and experience a match, get to know the team.”

She particularly likes the way the players shake hands with the fans at the end of the game.

“At my first match I couldn’t believe that the team were saying ‘thank you’ to me for coming to support them. That stood out as very different from the football you see on TV.”

Bess also loves the fact that so many friendly dogs seem to support Clapton, maybe this could be a way of getting more youngsters in, as everyone loves a cute dog photo!

At the moment Bessy has no more plans to produce any large banners – “that banner took forever to get done it was hard getting everything spaced out correctly” – but she says her Dad is always badgering her to help out with ones that he is doing.

At the moment, she’s just enjoying filling her sketchbook.

You can buy the programme with cover designed by Bessy at the games vs Pitshanger Dynamo, Cricklewood Wanderers and Brentford Women, priced £2.