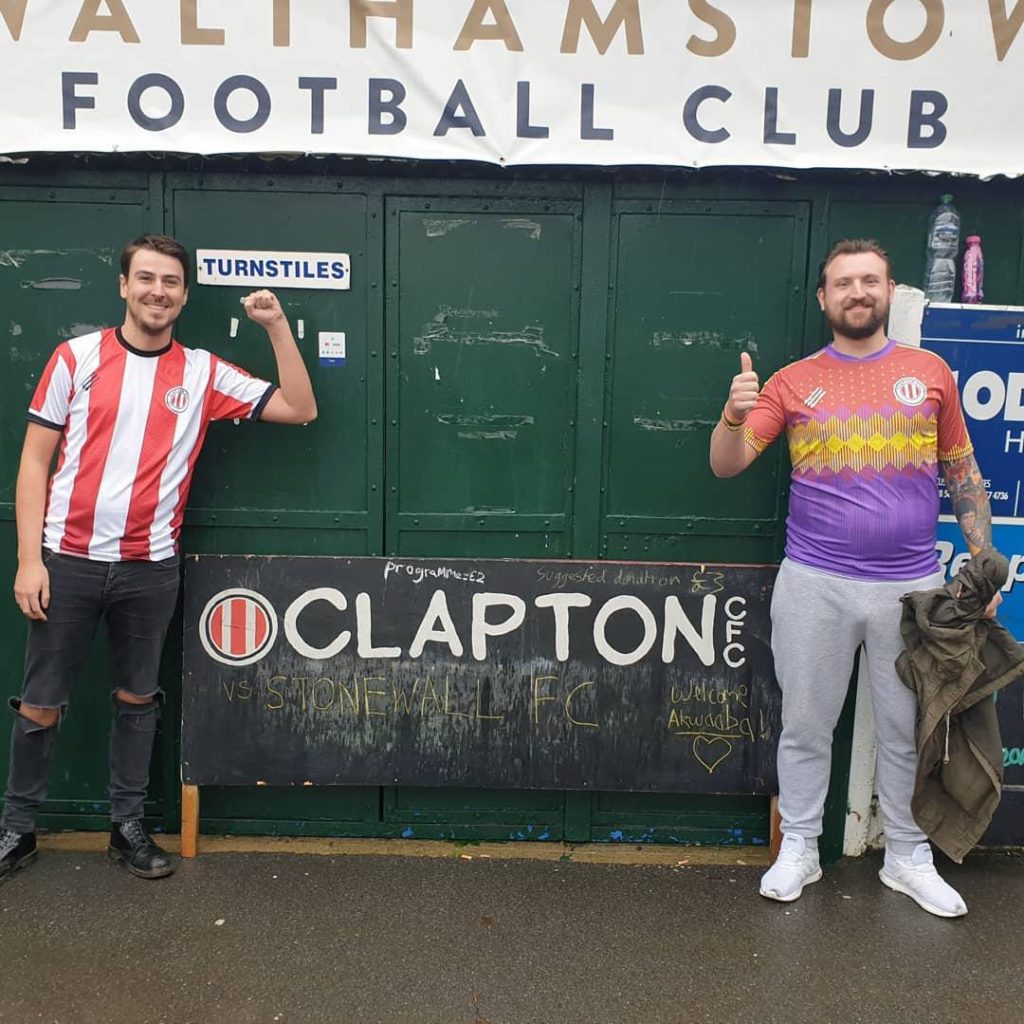 When a good friend, antifascist protest singer, Joe Solo posted on social media about the club’s famous away shirt, describing them as an anti-fascist community-run club. I was sold!
The shirt arrived two months later, and the small sizing made me look a lot fatter than I am (see photo). Regardless, I was finally proud to support a football club that represented my views. I was hooked immediately, becoming a member with my one of my best friends, Tim. He suggested we make a journey down and picked the ideal home fixture (on Non-league day) against the equally ethical Stonewall FC.

We set off at 7:00am from our ex-mining village of Ferryhill (County Durham). As we progressed down the motorway, the weather began to change and initially we thought this was a sign we should’ve stayed in the North East. We persisted through the downpour but fearful the match would be called off.
We arrived… 3 and a half hours early! Confused at the lack of activity, which in retrospect was understandable. Luckily the nearby William Morris gallery was a great surprise. This gave us the opportunity to take in some culture from a socialist that we had both admired. Returning to the ground it appeared livelier. Upon entering and buying a programme, we told a few very welcoming volunteers about our journey down and one was more than willing to give us a tour. He took us to the bar where I was shocked to get a Guinness for just £3.50, my local charges £3.30 up north! The pre-match excitement built as we walked around the ground seeing supporters getting in early to set up. Spending £110 on merchandise: three shirts, a scarf, and a flag of an anti-fascist democratically ran club. Bargain.

The conditions were perfect for a non-league fixture. I enjoyed the referee’s refusal to acknowledge heavy tackles or niggly fouls. I thought it was just up North the game was played this way. CCFC were initially down 2-0, but a spirited fightback saw them leave as 5-2 winners. Such a rollercoaster viewing experience. The best part of the match though? The atmosphere. Having attended games with tens of thousands of people in attendance, I’ve not felt an atmosphere quite like it. Pure passion from the supporters – something I will never forget.

We headed home discussing the state of modern football. At the money-driven end of the sport, I am a fan of Newcastle United. Travelling to watch CCFC, our food and drink throughout the day, our programme, and entry to the ground cost less than a ticket to watch a ‘premier’ team. I use the term ‘fan’ because I no longer consider myself a supporter of Newcastle. I will always love the club and the fans, but I’m severely disenfranchised with how modern football teams are ran at the highest level. Mike Ashley doesn’t need my money, but he would be willing to take and, of course, waste it.

A team I genuinely support is Lincoln/Grimsby amateur league clubs Broadley FC. Tim formed the football club with close friends at university after the sudden death of his friend Richard Broadley, aged 20 from leukaemia. The club honours Rich’s life through the sport he loved most and since its formation the club has made over £15,000 for Bloodwise. A few years ago, I got involved and created a 35-minute documentary telling the story of the club (search ‘Broadley FC’ on youtube). Since then, I have backed the club at every opportunity. One of my favourite days of the year is the annual Broadley cup, and in May of this year I was honoured to present the Richard Broadley trophy to the winners. That love I feel for Broadley FC is the love I felt for Newcastle United as a child and the love I’m starting to feel for CCFC now. Broadley FC and Clapton CFC are clubs that deserve support because they play football for the right reasons. To remember someone, to raise money for charity, to fight homophobia and fascism, to stand up to modern football, and to give control back to the fans.