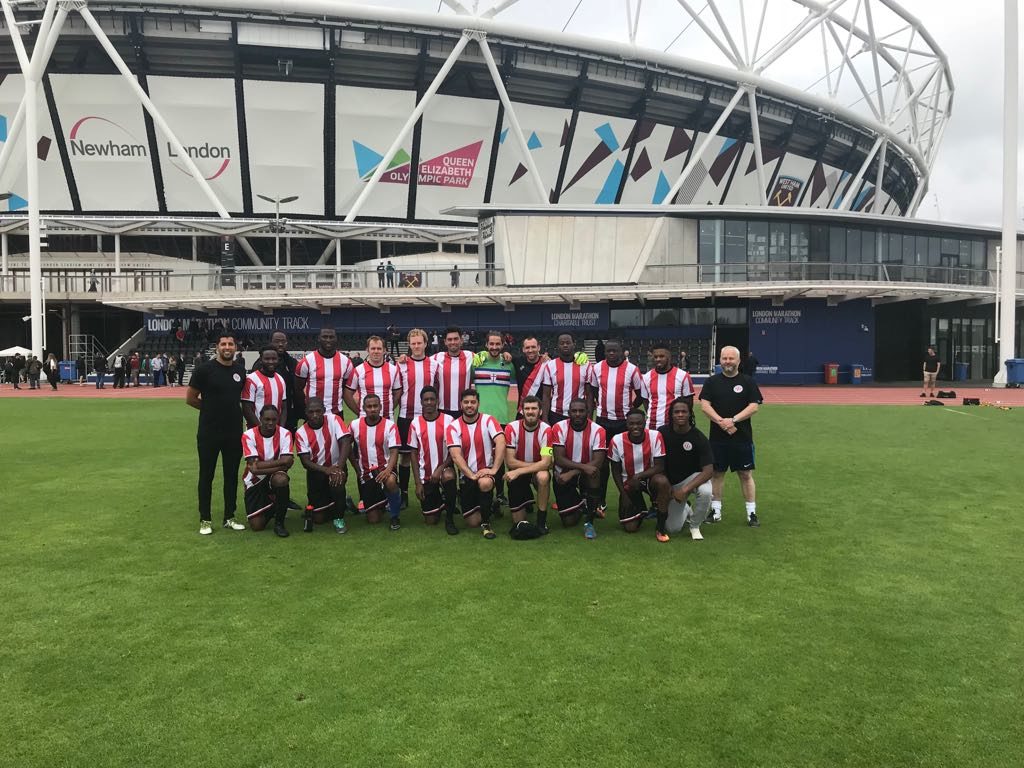 Clapton CFC succumbed to a 3-0 defeat against West Essex on a drizzly afternoon at the London Marathon Community Track, but there were plenty of positives for player-manager Geoff Ocran to take into next Saturday’s game against Sporting Hackney.

A much-improved CCFC showed cohesion and looked dangerous on the counter attack against their ESL opponents.

Old Clapton favourite Tony Cookey and Joshua Adejokun were particularly impressive, stretching a West Essex defence that struggled to cope with the pace of the Ton’s front three.

Ocran himself led the midfield charge, and defender Tom Carding had a fine game. Both hurled themselves into tackles all the way to the final whistle.

West Essex – who play three steps above CCFC in the Essex Senior League – showed their class and experience over the 90 minutes.

They sat a little deeper in the second half to nullify Clapton’s out-ball and created a number of clear-cut chances, more of which should have been converted.

Clapton had almost all their joy in their first half and were adept at turning defence into attack at speed.

They had the first big chance to open the scoring, winning a penalty in the fifth minute. Cookey stepped up and skied it.

Our first penalty – but our first goal is still to come…

Defender Tom Carding, who was superb at both ends of the pitch, had a first-half diving header disallowed after a Clapton corner was judged to have drifted out of play.

Clapton centre-back Thom cruelly denied a goal for… something. Probably a good call.

And a minute later, West Essex break and score.

West Essex’s best first-half chances came from long balls in behind Clapton’s defence, exploiting the space between the full-backs and centre-backs.

These were often snuffed out by Carding, who made the most of a well-manicured pitch by slide-tackling opponents at every available opportunity.

The Stags’ first-half goal came from one of those counters – winger Tom Macleod ran onto a long ball after a spell of Clapton pressure and finished strongly to put the Stags one up after 35 minutes.

Again, the lino does his job.

While the first half was an excellent contest, West Essex dominated the second half and could have scored more.

Their second, after 48 minutes, came from a rather unfortunate sequence of events. A free-kick swung in from the right went through a crowd of players, through goalkeeper Vlad Bendovsryy, bounced off a Clapton defender and nestled into the net.

Bendovsryy more than made up for his error fifteen minutes later, hurling himself across the six-yard line to brilliantly save a Macleod header.

These extremes aside, Vlad looked good in the Clapton net, aided by the beautiful Sampdoria goalie jersey.

A stream of West Essex chances followed, ending with Macleod setting up a teammate to smash a third in off the bar during stoppage time, putting paid to any idea of a Clapton comeback.

Despite the defeat, the match represented a big improvement on last weekend’s 5-0 friendly defeat to Holland FC.

We chat with Tom Carding, who scored a cracking header that got disallowed, and player-manager Geoff Ocran about today’s 3-0 loss to West Essex in the shadow of West Ham’s London Stadium.

“This was much more cohesive and with more players playing in their natural positions and I think that showed in the first half,” Ocran said after the game.

“It would have been interesting to see what would have happened if we’d have scored the first goal because I thought we started the better team, but we kept it well and kept to the game plan.”

He continued: “We’re playing a team that’s three levels above and we competed for the majority of the game … there’s a lot of positives to take and I’m pretty close to finalising the squad.

“There’s going to be competitions for places in key positions.”

Stumbled upon @ClaptonCFC playing round the corner from me. Big crowd. pic.twitter.com/m9bC4lAabx

Massive thanks 🙏🏻 to the 115 supporters that braved wet and windy weather to watch a very enjoyable friendly today. A good 3-0 win for us but we could have had no complaints if the margin had been far narrower. Cheers @ClaptonCFC and good luck for the season. 🦌♥️⚽️ pic.twitter.com/ZXCeDTLH0Y

FT @westessexfc 3-0 @ClaptonCFC Decent work out for both sides but it's the #ESL hosts who win this friendly in the Olympic Park @ELRFootball pic.twitter.com/Yo6WOb1xPo